A few years ago, I had a book published called Disasters That Changed Australia. As the title suggests it has nothing to do with music or recorded sound, but one chapter discusses fire disasters, something Australians have to live with.

Eucalyptus trees dominate the vegetation of Australia to an extent unmatched by any genus of plant on any other continent. Other sorts of forest, especially the pines and firs of Siberia and North America, are affected by fire. Other dry lands have plants which need fire to regenerate, like the proteas of southern Africa. But nowhere else in the world has the forest evolved to burn so readily, and with such fury. The eucalyptus tree is a ‘fire weed’. Some survive fires that would kill most other species. Others, like the majestic mountain ash, only reproduce in the wake of a calamitous fire.

The Australian ecosystem is dominated by fire. What the world calls wildfire, but here is always called “bushfire” is a signature Australian experience. Fire does not feature strongly in Australian art or popular culture which is surprising given that. to an extent unmatched anywhere else in the world. But you would not guess it from our art. It is a strange and dangerous absence. We forget about fire.

There are a few exceptions: children’s books, some paintings and poems. After the 2009 fire disaster which came to be known as Black Saturday, I wrote some lyrics which were set to music by my brother, Pat Evans, who is a professional musician.

The reason I mention these things is that recently I discovered another song about bushfires. It was on an album, one of literally hundreds which recently turned up in a local op-shop. They once belonged to someone who wrote “M” on the labels. I know nothing else about M, but he or she loved country music, both the American wellspring and the Australian sub-tradition, and M’s collection of Australian country from the 1960s is almost definitive. 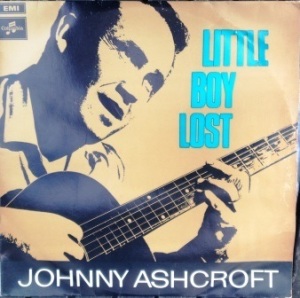 I have been slowly working through them, and one which really stands out is the Johnny Ashcroft LP, Little Boy Lost. The title track was a big hit for Ashcroft in 1960, and this album was put together not long after. The production and musicianship are classy – perhaps the best I have heard from an Australian act of this period – and the songs are strong. Ashcroft does lively versions of some Australian standards – he even manages to make Waltzing Matilda enjoyable to listen to – but most are originals. There is a slight sentimental edge at times, but as Australian songs about Australian experiences, at a time when few people covered that terrain, these are impressive songs. And Ashcroft is a strong singer, with a rich and expressive voice.

My favourite track is this one, about the experience of a bushfire and the sheer terror of encountering such a force of nature.