Someone in France has just paid me five Australian dollars for a Jerry Lee Lewis compilation LP issued 51 years ago. What makes it more impressive is that the postage was another $22.00. It doesn’t seem as much in euros, maybe. But it does show a love for the music of this feral cat of a man which I now fully understand. 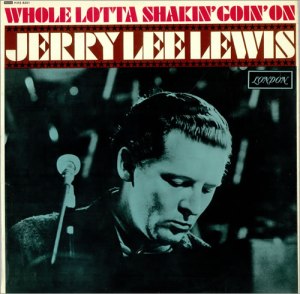 I had always thought of Jerry Lee Lewis as kind of a poor-man’s Elvis. I only knew a few hits, and one of those had the misfortune of being ruined by a television advertisement in the 1970s. There was a snack food comprised of equal parts salt, fat, corn-starch and yellow food-dye, something like the Cheesy Poofs which appear on South Park. Anyway, they carried a jingle which went “Goodness, gracious GREAT balls of cheese!” This has made it hard for me to appreciate “Great Balls of Fire” ever since.

So I had low expectations when I picked up this compilation LP, released in the mid-1960s, but given a clean and played loud, it was like being smacked in the face with a live catfish. The thumping boogie piano, the yowling exuberant singing, the utterly unrepentant tom catting lyrics (“She’s too cute to be a minute over seventeen!”): it’s exciting and wild and quite unlike anything I have ever heard.

Lewis himself is like a South Park character. Married seven times (once to his 13-year-old second-cousin), he is a drinkin’, drug-abusin’, gun-totin’ redneck. Astonishingly, born in 1935 and burning both ends of the candle ever since, he is still alive. Long candle, I guess.   He was arrested while waving a gun outside Gracelands in 1976, and once accidentally shot his bass player in the chest. Not, in short, someone you would especially want your daughter to marry. But, man, what a performer.

I love this record so much I can’t stick to one song, so I am going with two sides of what was a 1960 single. The A side is a soulful, imaginative take on the blues standard “John Henry”: The B side is more typical, a rockabilly number, “Hang Up My Rock And Roll Shoes”. Meantime, the LP is on its way to France, where soon there will be a whole lotta shakin’ goin’ on.