She was a southern belle with big hair and a husky voice, and for a short time she was the biggest thing in country music. Born in Mississippi in 1944 to dirt-poor farmers, Roberta Lee Streeter managed to get to college, where she studied philosophy and music. She was good at both, and adopting the stage name Bobbie Gentry, she had a smash hit in 1967 with the swamp-gothic story song “Ode to Billie Joe”. 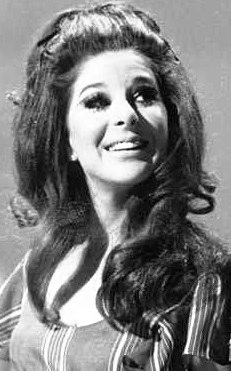 Later she went more mainstream, recording covers albums and duets with Glenn Campbell, hosted some fairly bland television shows, then retired from performing. But in between, she recorded an album, The Delta Sweete which was, writes Dorian Lynskey in the Guardian, “her second record and her masterpiece: a multi-faceted quasi-concept album about Gentry’s Mississippi delta roots”.

I discovered this astonishing work via one of the singles released from it. The A-side is a vivacious version of the Doug Kershaw song “Louisiana Man”: Gentry’s take leaps out at the listener, fresh as a kicking catfish. But it is the B-side, “Courtyard” which dazzles, even on the scratchy disc I found. A Scots folk ballad meets Astral Weeks in a graveyard on a sticky summer’s day: understated, lovely, chilling.

most of The Delta Sweete‘s innovative, sophisticated sound is down to Gentry herself, who played piano, guitar, banjo, bass and vibes. Swampy southern grooves mingle with the latest Nashville trends, blue-eyed soul [and] whispered intimations of psychedelia … each track blurs, dream-like, into the next … the earlier tracks chime with her public image as a husky, sensual southern belle but [elsewhere] her voice enters … like sun filtering though curtains.

And he is right. The LP sank with little trace at the time. This single peaked at 100 on the US charts, and did not even register elsewhere. The Planet Vinyl manifesto declares:

We are archaeologists of sound, at a dig. We value the pot shards and door knobs and belt buckles, and we sometimes find riches unimagined.

Bobbie Gentry’s The Delta Sweete is one of those.