There was a man, a German soldier. It was the First World War, and he had been captured by the army of Tsarist Russia. Then there was a revolution, and the Tsar was overthrown. Then there was a civil war. All the while the man remained a prisoner, in Siberia. But a Russian woman fell in love with this enemy alien, and the two married and, in 1920, they had a child. The father was able to take his new family back to Germany, and there the child, Rita Streich, was trained in music. She became a promising soprano.

The tide of history meant that Streich, born in the Soviet Union, made her professional debut in the Germany of the Third Reich, in 1943. The Nazi regime ceased to exist two years later, but Streich was still able to sing, and did so on both sides of what became the Iron Curtain.

She was most famous for her operatic roles, but Streich was also a master of the romantic lieder of the 19th century.

This is a recording of a song written by Franz Schubert, “Die Liebende Schreibt”, which roughly translates as “the lover writes”. I have mused elsewhere about the troubled, mixed up, messy life of Schubert. He, too, was a survivor of war and turmoil. This song was written in 1819, when Europe had been bled white by the wars of Napoleon.

Perhaps it is only fitting that Rita Streich, herself the product and survivor of war and turmoil … what is the right word? Lives. Inhabits. Just is. I don’t know, but there is a communion here. Two artistic souls who have known trouble come together in a short song which carries in it the beauty and the sadness of the world.

There was a time before microphones. Think about what that meant for a singer. You had to stand on stage in front of an orchestra, and your unaided voice had to reach the far corner of the hall. It is an astonishing thing: to sing with pitch, control, feeling, as well as power and volume. It requires talent, dedication and training, and technique.

Richard Tauber in his dapper prime

Microphones changed singing. From the 1930s on, it was possible to front a band and sing, and let the microphone do the heavy lifting. You could focus on timing, timbre and expression. Paradox: the electronically amplified singer can sound more natural.

So to modern ears, operatic singing is a bit of an acquired taste. The power and volume of the natural, trained classical voice seems a bit odd, stylised, artificial. It is worth making the effort, though. Before the microphone, classical singing was singing. This was how it was done, how music sounded.

One of the early superstars of recorded music was Richard Tauber. He wore a monocle. Along with a silk top hat, it was his trademark. He did not need the lens to see. In fact – well-kept secret – monocles are completely useless for helping vision. They were only ever a silly fashion item. But Tauber had a squint in one eye, and the monocle disguised that, and made him look dapper besides.

More to the point, Tauber could sing. A measure of his popularity is that long after he died (of lung cancer, in 1948), when superior recording techniques allowed other tenors to share their art, Richard Tauber’s work continued to be reissued.

I have not been able to determine when this track – one of more than 720 he recorded – was released on shellac. Guessing mid-1930s? Nor do I know when the vinyl EP reissue, with this and three other songs, came out. Guessing late 1950s? All that matters: here is a voice than has pitch, control and feeling, as and can reach the far corner of the hall. Just listen!

I had vaguely heard of Albert Schweitzer, without knowing too much about him. A peace activist and humanitarian, a theologian, a man of good works. Built some sort of hospital in Africa? That, and a mental picture of a guy with a big white moustache was about it. 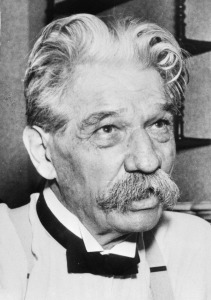 Not just a generous moustache

He was all of those things – and the mo was certainly impressive – but Dr Albert Schweitzer was also an important musician. He was an organist, one of great talent and also a keen thinker about music. He loved the works of J.S. Bach and he wanted to rescue his hero from the excesses of the 19th century Romantic style. Bach should be played, Schweitzer, argued, in the simpler, stripped down style of Bach’s own time. In modern terms, he wanted unplugged rather than prog-rock.

In 1934, while spending some time in England, he was recorded playing the organ at Queen’s Hall in London, and one of the pieces, “When In Deepest Need” is on this disc. This gentle, reflective piece was written by Bach literally on his death bed. It is at nearly five minutes, a rather long piece to fit onto a 12-inch shellac record, playing at 78 rpm, manufactured in 1934. His Master’s Voice managed to do this by the simple expedient of making the label for this side of the disc unusually small. The picture below shows the labels on the two sides of the disc, next to the same blue-framed sticker. 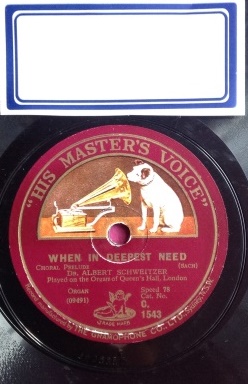 The record has been played a great many times – there is no escaping the crackle of hundreds of hollow steel styli which have scraped away at the shellac. Even so, the playing is beautiful, restrained. The organ can be a Donald Trump of an instrument – all blare and bombast – but Albert Schweitzer had a different vision, a subtle expression of a dying man’s love and faith.

Many of the records featured on this blog, and hundreds of others, are for sale via Discogs.

On record covers, the great composers of classical music always look like solid members of the establishment. The cover design tends to emphasise this: lots of pillars, porcelain, baroque filigree, guys in powdered wigs. Unthreatening, respectable, venerated – and dull. Rubbish, all of it, and it so betrays both the musicians and the music.

These were passionate, often erratic, artists. Many knew little or no recognition in their lifetimes, and many died young, poor or both. Only when safely dead could they be carved in marble, put on a pedestal, and become tame and safe.

But, performed well, the music cuts through all this. For no one is this truer than Franz Schubert: a prolific writer of some of the most impassioned and beautiful music ever written. His genius was not recognised in his lifetime, partly because his brilliance as a composer was not matched by his ability as a performer. He was part of the music scene in Vienna in the 1820s, but never made much money. He died, aged only 31, having suffered from syphilis and finally knocked off by typhoid. And somehow, in that short and at times dissolute life he wrote literally hundreds of songs and instrumental pieces: original, inventive, and full of passion.

This piece is the second movement from his “Piano Trio in B Flat, Op. 99”. Exciting titles are not the strong point of classical music, but get past that and just listen. Beautifully and subtly performed by the Suk Trio in a 1967 recording, this is music which is like the last leaf falling from a tree in the last light of day. It captures and transmits the beauty and the sadness of the world.

I mused a little while ago about how the Soviet Union, as oppressive and bureaucratic a society as ever shot a dissident, managed to produce great art. Pianist Sviatoslav Richter (no relation to the earthquake guy) personifies the paradox.

Born just before the Bolshevik Revolution, Richter’s father was German by origin. During the Second World War, this made Richter senior an automatic target of Soviet paranoia, and he was arrested as a spy and shot in 1941.

Young Richter, a largely self-taught musical genius, survived the war and in 1949 won the Stalin Prize for his music. He began to tour extensively, first in Communist countries but later – despite the political tensions of the time – in the West as well. He is widely regarded as one of the finest pianists of the 20th century. I am not qualified to judge, but his playing is certainly lovely beyond words.

Richter’s approach to music was that the player was a channel, a medium, from the composer to the listener.

The interpreter is really an executant, carrying out the composer’s intentions to the letter. He doesn’t add anything that isn’t already in the work. If he is talented, he allows us to glimpse the truth of the work that is in itself a thing of genius and that is reflected in him. He shouldn’t dominate the music, but should dissolve into it.

This track comes from a 1965 EP released on Concert Hall, a budget reissue label. It has a lot of wear, but even so the beauty of Richter’s playing of Schubert’ “Allegretto in C Minor” shines through.

People used to weep, hearing Richter play. Even through the crackle and hiss I understand why.

Kurt Maier was born in Germany in 1911, and became a skilled pilot. He fought with the Luftwaffe during the Second World War, and rose to the rank of Major. He was awarded the Knight’s Cross of the Iron Cross with Oak Leaves, for bravery and leadership. Perhaps surprisingly, Maier survived the war.

All the above is true, but that was another Kurt Maier.

The Kurt Maier who plays the piano on this record was a Jew.

He, too, was born in 1911, but in what was then Czechoslovakia. By the time the Nazis seized the Sudetenland area of Czechoslovakia in 1938, he was a successful musician. He escaped to the relative safety of Prague, but at the end of 1941 he and his mother were deported to the concentration camp at Theresienstadt, and later to Auschwitz. His musical skills kept him alive: he played in the camp band. He was transferred to a slave labour camp, and then again to Buchanwald. Astonishingly, this Kurt Meier also survived the war.

Amazing the different paths a life can take. 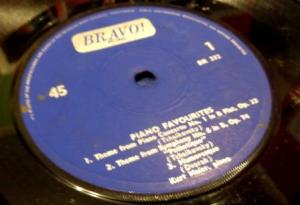 In 1946 Maier migrated to the United States, and became popular pianist in the night club scene. He took the classical works he had grown up on, and arranged them with a jazz-tinged up-tempo flavour. This could easily be gimmicky – a sort of early model Hook On Classics – but it actually works well.

Piano Favourites was released in 1964, though the recordings are almost certainly older. It was one of those EPs that people would stack up on the radiogram and play at parties. And played a lot it has clearly been – it is a bashed and battered old thing. But like Kurt Maier, it has survived, and it carries an astonishing and inspiring story.